The first big change came in 2000 after the summer Olympic Games. The International Table Tennis Federation changed the size of the ball from 38 mm to 40 mm. They decided that the game had gotten too fast and they wanted to slow it down. The 40 mm ball is slower, spins less and most importantly made it easier to watch the game on television.

The second big change was the material used to make the balls. Effective July 1, 2014 only balls made from plastic were legal for ITTF tournament play. These are commonly referred to as “poly” balls. Celluloid, the material of choice for decades, is no longer legal at the highest levels of the game. Celluloid is flammable, and it is a very severe health hazard. It is banned in many countries. The ITTF felt that the supply of raw celluloid for table tennis balls could become a problem. Better to change the balls now than face shortages later.

I suggest buying a “poly” ball, but which one? Balls are labeled one star, two star or three star with three being the highest quality. Even the most expensive ball is no more than the price of a golf ball and they are impossible to slice into the lake. So buy three star balls.

While there are many balls on the market there is only a small handful of manufacturers making balls under many different labels.

There are only 2 manufacturers, DHS and Double Fish. These balls do not play very well and they break very easily. Everyone agrees these are terrible, don’t buy them.  But they also relabel the balls and sell them under the following names, don't buy them either.
CHINESE BALLS (PLASTIC WITH SEAM)  2nd Generation

After the disaster of the initial balls the two manufacturers made changes. In 2017 they switched the raw material to acrylonitrile butadiene styrene, known as ABS. They are much, much better.
CHINESE BALLS (PLASTIC SEAMLESS)

All seamless balls are manufactured by Shanghai Minkow in China. So far I have heard good things about them. The company sells them under the names.  But the same balls are also relabeled and sold under the following names.
GERMAN BALLS (PLASTIC WITH SEAM)

The following balls are produced in Germany by Weener Plastik GmbH. They were first released towards the end of 2015. Some good reviews, some bad reviews.
JAPANESE BALLS (PLASTIC WITH SEAM)

Just about everyone seems to agree that these are the best. And they should be, they are much more expensive than everything else out there.

Both Nittaku and DHS announced the availability of 3 star poly balls in orange. 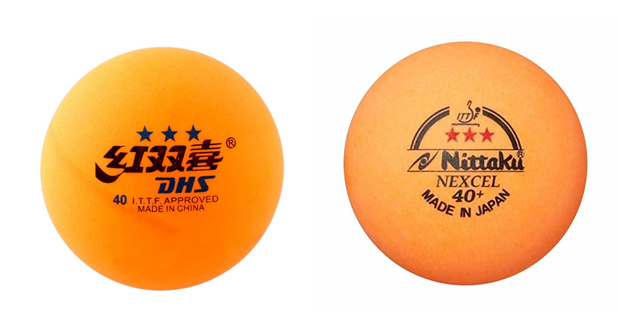